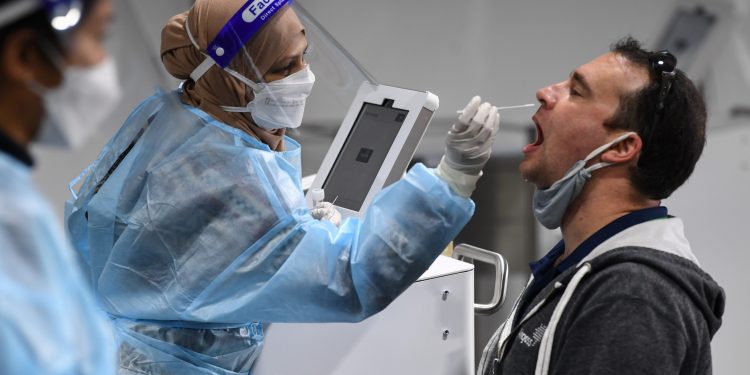 A man takes a COVID-19 test at Sydney International Airport on November 28, 2021.

An estimated five million Americans stayed home at work as Omicron infections surged across the nation, raising a fresh threat to the economic recovery.

The projection from Andrew Hunter, senior economist at Capital Economics, underscores the rising caseload stemming from the highly-transmissible, but less lethal, Omicron variant. It’s resulted in a flurry of flight cancellations in recent weeks and stop-start closures of hospitality venues because of staff getting infected.

That amounts to over two percent of the US workforce in quarantine, per the Capital Economics estimate.

The US added a paltry 199,000 jobs in December, according to a new jobs report released Friday. Due to when the data was recorded, it didn’t account for the sharp jump in Omicron cases, Insider’s Ben Winck reported.

Even without the full impact of the Omicron wave in the data, Friday’s jobs report showed a large uptick in the number of Americans reporting missing work because of illness:

As seen in the above chart, the number of Americans who were employed but not working because of an illness rose to nearly 1.7 million people, or an increase of 11% in a single month in December.

The Omicron wave has raised some alarm in Congress. A bipartisan group of lawmakers are discussing another stimulus package focused on providing aid to restaurants and other small businesses that could total tens of billions of dollars.

“I think the need is very significant,” Sen. Ron Wyden, chair of the Senate Finance Committee, told Insider last week. “There are a lot of people who tell us that they’re going to be falling between the cracks  — that there was a big, big problem before the new variant — and it’s gotten greater in the last few weeks.”

Meanwhile, the White House said Friday that it’s monitoring Omicron’s effects on the economy and hasn’t decided whether to press for another round of federal aid. Republicans are hammering the Biden administration for failing to keep inflation in check with prices rising across the board, particularly for groceries and gas.

Democrats and left-leaning economists argue those price increases are largely due to pandemic-related supply-chain disruptions paired with millions of workers quitting what are often poorly-paid jobs, and that inflation should subside this year as markets return to normal.

On Friday, President Joe Biden started stepping up his attacks on Republicans for blocking swaths of his agenda, including on its signature $2 trillion Build Back Better economic package and voting rights.