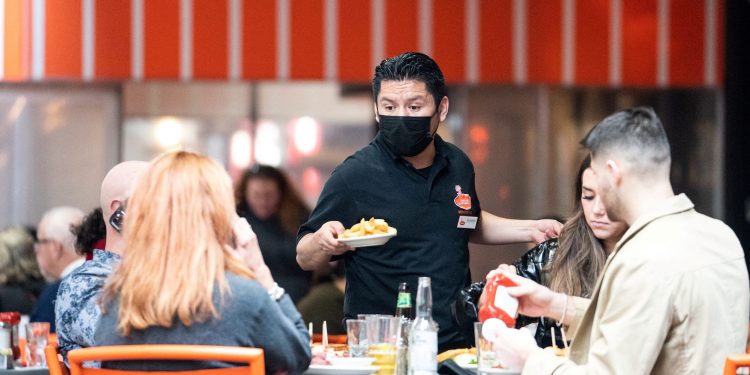 A waiter serves food at a restaurant near Times Square in New York City, U.S., December 16, 2021.

Fears of a US recession are the most widespread since the coronavirus locked down the economy in early 2020, but the latest data suggests there’s little to worry about.

With the Russia-Ukraine conflict roiling supply chains and lifting inflation even higher, economists’ outlooks toward the recovery are weakening fast. Growth will very likely come in below initial forecasts, but that doesn’t mean the US is plunging into a new downturn. By nearly all measures, the economy is still roaring back to life, and at a much better pace than seen after the Great Recession.

“We are a bit more remote from the immediate effects of the war compared to Europe, but we will be feeling them over time,” Federal Reserve Chair Jerome Powell said during a panel discussion on Thursday. “But the US economy is very strong, performing very well. By most forecasts, we’ll have another strong growth year this year.”

Markets reporter Sam Ro was even simpler when detailing his optimistic outlook in a Sunday newsletter.

“Despite high inflation, rising interest rates, and geopolitical uncertainty, the economy most certainly doesn’t seem to be headed for a recession any time soon,” he wrote.

The US rebound is alive and well, from breakneck job creation to Americans’ record-breaking spending spree. Here are three charts detailing the strength of the economic recovery amid new recession warnings.

The jobs recovery is 93% done

The labor market has flashed some of the most bullish indicators of how the country is rebounding.

Recent data showed the US adding 431,000 nonfarm payrolls in March, a sum that’s still more than double the pre-pandemic average despite high inflation and the labor shortage. The unemployment rate also fell more than expected to 3.6%, nearly hitting the record lows seen before the coronavirus recession started.

The economy has now recovered about 93% of the jobs it lost during initial lockdowns. It took just 25 months to reach that level of progress, an extraordinary speed when compared to other post-war recoveries. By comparison, it took the same period during the recovery from the 2008 financial crisis just to hit the labor market’s lowest point.

The return to the pre-pandemic jobs count is also set to happen three times faster than the employment recovery of the early 2010s. While job growth is likely to slow as the country gets closer to full employment, the labor market’s V-shaped rebound and unusually strong demand for workers suggest the US is far from another downturn.

Consumer spending counts for about 70% of economic activity, making it a crucial fuel for the economy as it returns to pre-pandemic health. The fastest inflation in 41 years raised concerns that high prices would curb shoppers’ spending spree, but data shows the boom lasting well into 2022.

Personal consumption expenditures — the most sweeping measure of Americans’ spending activity — rose 0.2% in February to a record-high $16.7 trillion, the Bureau of Economic Analysis said on March 31. That followed a massive 2.7% leap in February.

The improvement doesn’t just extend the rally, but keeps it handily above the pre-pandemic trend. Government stimulus and pent-up savings boosted spending as the economy reopened in early 2021. Yet the streak has held strong even as aid dried up and inflation soared. There may be new risks on the horizon, but Americans are still spending like the economy just reopened.

Companies are raking in massive profits

The massive spending seen throughout the recovery has also buoyed the measure that Wall Street cares about the most: corporate earnings.

About a fifth of S&P 500 companies have reported first-quarter earnings so far, and the results show little sign of a weakening economy. Seventy-nine percent of companies that have reported their latest figures beat earnings-per-share forecasts, and 69% reported stronger-than-expected revenues, according to FactSet.

More broadly, companies are raking in much bigger profits than they did before the pandemic. S&P 500 earnings per share hit a record $204 at the end of 2021, up more than a third from pre-crisis levels. If first-quarter reports continue to beat forecasts, that figure will climb to even loftier all-time highs.

The stock market isn’t the best economic indicator for forecasting a recession, but with companies notching record profits and spending still on the rise, the recovery is looking plenty healthy across the board.