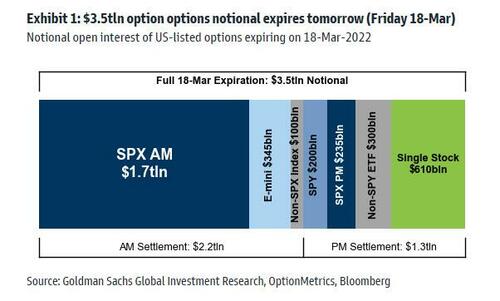 As Goldman’s head of FX sales Tony Pasquariello wrote last Friday, “next week is a huge one, featuring the FOMC on Wednesday and a major derivatives expiry on Friday.” And indeed, now that the Fed’s rate hike is officially a fact and in the rearview mirror, Wall Street traders are bracing for the week’s final fireworks.

In the quarterly event known as “quad witching” (technically, it’s been “triple” since the close of OneChicago in September 2020, when single stock futures ceased trading, but for veteran traders it will always be quad), over $3.5 trillion of Index Options, Index Futures and Single Stock Options expire, either at the open of trade or at the close on Friday.

Adding to the frenzy, at the same time more near-the-money options are maturing than at any time since 2019 meaning that highly caffeinated traders will actively be trading around those positions as they seek to capitalize on any drift away “pins” (we will have a full list of the stocks most likely to see significant volatility tomorrow morning).

Furthermore, according to Goldman’s Rocky Fishman, investors will also be watching the ETN market given the substantial size of expiring VXX. As a reminder, the VXX – the single largest volatility-tracking ETN – has been trading at a 12% premium to its NAV since its issuer suspended creations…

… and should the VXX rally strongly from its current level, its in-the-money call options would be large relative to shares outstanding.

Tomorrow’s quad witching also coincides with a rebalancing of benchmark indexes including the S&P 500, a two-for-one special that leads to soaring trading volumes that rank among the highest of the year. According to an estimate from Howard Silverblatt, senior index analyst at S&P Dow Jones Indices, the rebalance in the index alone could spur $33 billion of stock trades.

Traditionally, over the past year, “quad witches” have seen poor market returns, however heading into tomorrow’s option expiration, the S&P is posting the best 3-day return since the Dec 2020 election.

So is the party about to end? As many contracts expire, Bloomberg notes that the key question is whether investors will rebuild their record holdings of index puts amid growth concerns and the war in Ukraine — or will they come out of their shells, and chase the market rebound with call contracts, creating a negative gamma meltup at a time when most dealers are still short gamma.

Or will stocks tumble as trading desks such as JPMorgan “sell the rally” to naive investors who listen to the bank’s latest call to buy the dip.

But while retail investors are confident they know how to trade tomorrow’s chaos, veteran traders are ducking for cover: “I’ve never seen an environment where you’ve had so many potential overhangs in the market that can not be controlled,” said David Wagner, a portfolio manager at Aptus Capital Advisors. “We’ll see if people can see to redeploy their puts.”

If not, we may get an extension of the meltup as an avalanche of put closing sparks a delta cascade: exploding derivatives volume has been a fixture of the post-pandemic market — whipsawing underlying stocks in both directions, again and again. To strategists including Nomura’s Charlie McElligott, this week’s advance in the S&P 500 has again been amplified by the hedging activity of market-makers. And should we get another gamma squeeze, the S&P may soar.

On the other hand, many of the usual catalysts for a melt up are missing: thanks to the recent surge in stocks, dealers are now flat gamma, meaning they no longer have to accentuate market trends..

Meanwhile, thanks to the recent 3-day meltup, the negative delta has also been unwound faster than anticipated. Notably, as SpotGamma explains, yesterday saw a total lack of positive call deltas in the SPY & QQQ. You can see below that SPY traders were fairly heavy call sellers into the AM short-stock cover, and then after 1PM ET and through the FOMC flow was neutral. The QQQ chart was similar.

Commenting on the same phenomenon, Nomura’s McElligott writes that the “Short Delta” hedge cover on the murdering of downside Puts led to move short-covering of client dynamic hedges in futures too, where for ES, the bank’s imbalance monitor showed what was the second largest day of “buy pressure” over the past month for all lot sizes, led by what looked like straight-up VWAP style buying-to-cover (slicing your order in the machine over “small lots”)

Another reason why stocks could defy prevailing sentiment, which as the latest Fear and Greed index describes simply as “fear”…

… is technicals and positioning. As Marko Kolanovic notes, current risk positioning is very light as a result of high and persistent volatility, and risk aversion caused by global geopolitical developments: “the AAII bull-bear indicator at -27 is near its 2020 lows and 2 standard deviations below average. Equity exposure for volatility sensitive investors – the largest and fastest group of investors (including insurance, risk parity, dynamically hedged portfolios, HF platforms, etc.) – is now in its ~5-10th percentile, and for this reason risks are skewed to the upside.” Meanwhile, with market sentiment weak and institutional-fund exposure to equities near mutliyear lows, caution in the derivatives market is everywhere. The 20-day average of the Cboe put-call ratio for equities, for example, hovers near a two-year high, which means that once again many are hedged and with little impetus to sell, stocks may simply melt up instead.

For those asking which strikes matter the most now into Op-Ex / and what % of overall gamma is set to expire along with the current and max Gamma sensitivity, here is the answer courtesy of Nomura.

That is a lot of gamma to ‘unclench’.

In any case, amid this cacophony of bullish and bearish catalysts, it is virtually impossible to come up with a coherent case for either sustained market upside or another sharp burst of selling: “We see a general trend of continued risk aversion among investors, and expectations that the stock market remains volatile,” said Steve Sears, president at Options Solutions. “There are so many major events that could change the market’s tempo that hedging and patient fortitude appears to be the message from the options market.”