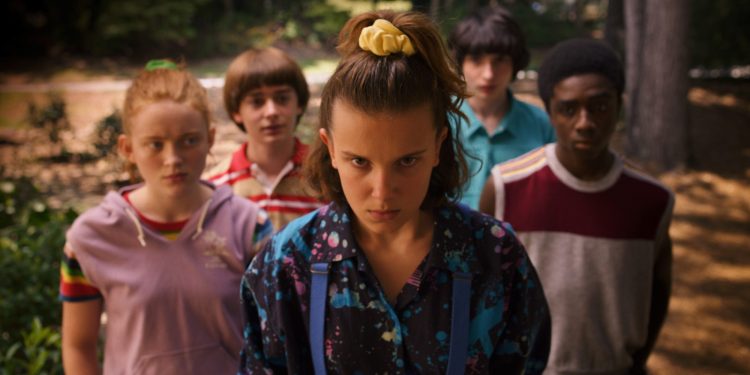 Season four of “Stranger Things” is now available to watch on Netflix. The popular show’s large ensemble cast is full of actors who have appeared in other hit movies, with some dating back to the late ’80s.

If you’re looking to fill the “Stranger Things” void left in your watchlist after finishing season four, we’ve got you covered. Below, we rounded up some of the best movies you can stream right now starring cast members from the show. All of our picks were selected using the following criteria:

David Harbour stars as Jim Hopper, the chief of the Hawkins Police Department, on all four seasons of “Stranger Things.”

Stream “Revolutionary Road” on Paramount Plus

“Revolutionary Road” explores the lives of married couple Frank and April (played by Leonardo DiCaprio and Kate Winslet) in the 1950s, and the ways their personal problems lead to a breakdown of their relationship. Harbour plays Shep, the couple’s neighbor and friend, whose affections for April cause problems.

Stream “A Walk Among the Tombstones” on Netflix

In this action thriller, Harbour plays Ray, a kidnapper central to the plot. “A Walk Among The Tombstones” follows Detective Matt Scudder (Liam Neeson) as he investigates the murder of a drug trafficker’s wife. He realizes the perpetrators’ crime sequence is a pattern and races to find them.

Rent “The Equalizer” for $4 on Amazon Prime Video and Vudu

“The Equalizer,” stars Denzel Washington as McCall, a defense intelligence officer who returns to service to protect a teenager from the Russian Mafia. Harbour plays a supporting role in the film as Masters, a police officer on the Russians’ payroll who reluctantly agrees to help McCall.

Harbour is part of an ensemble cast that includes Don Cheadle, Benicio del Toro, Brendan Fraser, Jon Hamm, and Ray Liotta in this crime thriller from director Steven Soderbergh. Set in 1954 Detroit, a group of small-time criminals are tasked with a heist that goes horribly wrong, leading to revelations about who hired them.

Stream “Black Widow” on Disney Plus

Harbour joined the Marvel Cinematic Universe in 2021’s “Black Widow.” The film explores the period of time when the titular superhero was on the run following the events of “Captain America: Civil War.” Harbour plays Alexei/Red Guardian, the Russian super-soldier equivalent of Captain America and a father figure to Natasha (Scarlett Johansson).

Winona Ryder plays Joyce Byers on “Stranger Things,” the mother of Will and Jonathan Byers. Ryder got her start in the 1980s and had her big breakout role in Tim Burton’s “Beetlejuice.”

Rent “Beetlejuice” for $4 from Amazon Prime Video and Vudu

Ryder’s first collaboration with Tim Burton was with the 1988 film “Beetlejuice,” where Ryder plays Lydia Deetz. Lydia’s family moves into the home of the recently deceased Maitlands, and she finds that she can see and interact with their ghosts. As part of the Maitlands’ quest to get the Deetz family to leave their house, they summon Beetlejuice (Michael Keaton), a crude “bio-exorcist” ghost who wreaks havoc on the home.

In the cult-classic “Heathers,” Ryder plays Veronica Sawyer, a student at Westerberg High School who is given a chance to join a clique of popular girls named Heather. Veronica becomes fascinated with a rebellious and dangerous new student, JD, who intends to murder all of the popular students at their school, including the Heathers.

Stream “Edward Scissorhands” on Disney Plus

In Ryder’s second collaboration with director Tim Burton, she starred in the fantasy romance film “Edward Scissorhands.” The movie follows an artificial human with scissor blades for hands (Johnny Depp) as he becomes integrated into suburbia. Ryder plays Kim, the daughter in the family who takes Edward in, and Edward’s eventual love interest.

Ryder stars as Josephine “Jo” March in the fifth film adaptation of Louisa May Alcott’s “Little Women,” which was released in 1994. The movie follows the four March sisters as they grow up during and after the Civil War. As the second oldest, Jo shoulders a lot of responsibility for the family, but she’s a dreamer who secretly aspires to be a published writer.

In Darren Aronofsky’s ballet thriller, Ryder plays Beth, a ballerina who was forced into retirement by her company’s artistic director. The movie primarily focuses on two younger dancers, played by Natalie Portman and Mila Kunis, who get cast in a production of “Swan Lake,” and the lengths they’ll go to in order to be perfect in their roles.

“Henry Gamble’s Birthday Party” is Kerry’s first feature film appearance. He plays Gabe in the movie, which focuses on a closeted 17-year-old’s birthday party as he struggles with his sexuality, faith, alcoholism, and erratic family members.

“Spree” is a comedy-horror film for the social media age. Keery plays the protagonist, Kurt Kunkle. Kurt is a rideshare driver who is obsessed with all things social media, and in an attempt to go viral, he begins live streaming himself murdering passengers. The movie also features former “SNL” cast members Sasheer Zamata and Kyle Mooney, and it was executive produced by Drake.

Stream “Free Guy” on Disney Plus and HBO Max

“Free Guy” stars Ryan Reynolds as a bank teller who realizes he’s a non-playable character (NPC) in a video game called “Free City.” Keery plays Keys, a technical support employee who works at the studio who made “Free City.”

Millie Bobby Brown plays Eleven, whose escape from Hawkins Lab kickstarts the plot of “Stranger Things” in season one.

Brown plays the title role in this Netflix original movie, which follows the younger sister of the famous Holmes brothers, Sherlock and Mycroft. She’s embroiled in a mystery of her own when her mother goes missing, and she’s determined to solve it herself and prove she’s just as great a detective as Sherlock.

A sequel to “Enola Holmes,” starring Brown, is set to be released later in 2022.

“Godzilla vs. Kong” is a sequel to 2019’s “Godzilla: King of Monsters,” which also featured Brown in a main role. Two legendary monsters clash in the film, which sees the humans try to stop Godzilla’s rampages. Brown plays the daughter of Kyle Chandler’s Dr. Russell, who believes that there’s a reason for Godzilla’s behavior.

Finn Wolfhard stars as Mike Wheeler, one of the main characters on “Stranger Things” since season one.

Stream “It” on HBO Max

Wolfhard is one of the seven “losers” in 2017’s “It.” He plays Richie, who draws attention to the group with his loud mouth and crass humor. The horror movie follows a group of seven outcasts who are taunted and tortured by Pennywise the Dancing Clown.

Wolfhard returned in the sequel, “It Chapter Two,” where he shares the role of Richie with Bill Hader. You can stream that on HBO Max as well.

In the 2021 sequel to “Ghostbusters” and “Ghostbusters II,” Wolfhard stars as Trevor, the grandson of original Ghostbuster Egon Spengler (Harold Ramis). While exploring their grandfather’s house, Trevor and his sister, Phoebe, discover their connection to the original Ghostbusters. Bill Murray, Dan Aykroyd, Ernie Hudson, Annie Potts, and Sigourney Weaver all appear in the movie.

Sink stars in two of the three films in the “Fear Street” trilogy, which were released over three weeks in 2021. As a trilogy, the three movies all explore a different part of the notoriously cursed town of Shadyside. Sink plays the main character, Ziggy Berman, in “Part Two: 1978,” which is set at a summer camp as a murder spree is happening on the grounds. Sink also plays Constance in “Part Three: 1666,” which explores the origin of the curse on Shadyside.

Stream “I Believe in Unicorns” for free on Freevee and Tubi

Dyer stars as Davina in this coming-of-age romantic drama. On her 16th birthday, Davina meets Sterling during a picnic in the park and becomes infatuated with him. Eventually the two pursue a volatile relationship born out of Davina’s need to rebel and leave her hometown.

“Yes, God, Yes”  stars Dyer as Alice, a sheltered teenage girl at a Midwestern Catholic high school. Struggling to accept new feelings of sexual desire, Alice turns to an AOL chat room to get the kind of sex education she won’t get from her classes at school.

Rent “As You Are” on Amazon Prime Video and Vudu

Mixing the crime and romance genres, “As You Are” tells a story about three teenagers who navigate adolescence during the mid-1990s through their memories during a police investigation. Heaton plays Mark, who begins an intense friendship with Jack (Owen Campbell). They both meet Sarah (Amandla Stenberg), and the three of them navigate growing up, exploring their sexualities, and complicated family dynamics.

Heaton stars as Will in “No Future,” a drama that deals with addiction. When his estranged friend overdoses, Will returns to his hometown and reconnects with Claire (Catherine Keener), his friend’s mother. Will and Claire start a secret affair stemming from grief, guilt, and collective trauma.

Maya Hawke made her debut in season three of “Stranger Things” as Steve’s coworker Robin Buckley.

“Human Capital” is a remake of the 2013 Italian film. Set in Upstate New York, the movie follows the lives of two families before and after a hit-and-run car accident that affects both of them. The events of the movie unfold three times from three different character’s points of view, including Hawke’s Shannon, a high school student who may be directly involved in the hit-and-run.

The first film in the aforementioned “Fear Street” trilogy sets up the cursed town of Shadyside and introduces the main characters, including the older version of Sadie Sink’s character, played by Gillian Jacobs. Hawke plays Heather in the first film, whose murder kicks off the questioning into the long-standing curse.

“Concrete Cowboy” is a Western inspired by the urban African-American horse riding community in Philadelphia. McLaughlin stars as Cole alongside Idris Elba, who plays his estranged father. The film is all about Cole finding a sense of belonging within the community of Black cowboys.

Noah Schnapp plays Will Byers on “Stranger Things.” Will’s abduction in season one of the show alerts the residents of Hawkins to the supernatural happenings in their town.

Stream “Abe” for free with ads on Freevee, Tubi, and The Roku Channel

Schnapp stars as the title character in “Abe,” a 12-year-old boy feeling torn between two worlds. With his half-Israeli, half-Palestinian family always fighting, Abe thinks he has the perfect way to bring them all together. After being introduced to fusion cooking, he sets out to create a meal that will bridge the divides in his family.