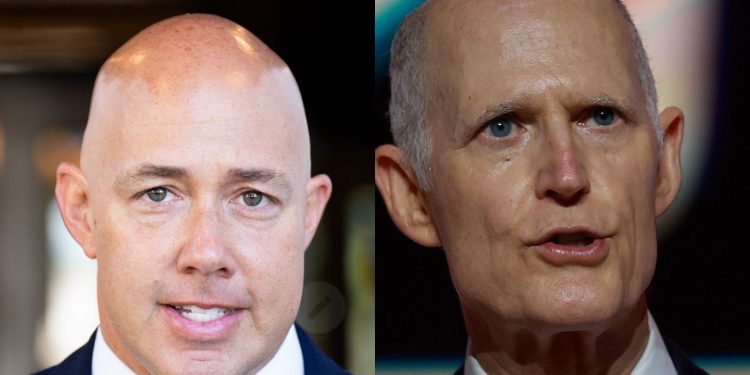 Rep. Brian Mast and Sen. Rick Scott — both of Florida — violated the Stop Trading on Congressional Knowledge Act of 2012. The law, in part, requires members of Congress to file disclosures within 45 days of making a stock transaction or other financial trade by the member or their spouse.

Scott, estimated by Insider to be the wealthiest member of Congress, reported on Monday that he and his wife sold up to $450,000 in stock in Emida Corporation in September 2021 — but he didn’t report the trade until more than a year after a federal deadline. Lawmakers are not required to provide the specific value of their trades, and instead, report them in broad ranges.

Based in California, Emida is a privately held company that provides technology support for the prepaid wireless and digital payments industries.

Scott’s communications director, McKinley Lewis, told Insider that the office immediately notified the Senate Ethics Committee once it noticed the disclosure error, and that “in accordance with the Committee’s instructions, the proper reports have been filed.”

Scott’s office confirmed that the US Senate Select Committee on Ethics has not, at present, assessed a fine — standard penalty: $200 — for a late STOCK Act disclosure.

Mast sold stock worth up to $50,000 in Ideal Power, a company that develops power switches for electric vehicles and other machinery, in February 2021. But he didn’t properly report the sale to the US House of Representatives until August 12.

This is the second time in two years Insider has found Mast crosswise with the STOCK Act, as the congressman was previously late disclosing a purchase of up to $100,000 of stock in an aerospace company.

Mast’s communications director, AnnMarie Graham, told Insider that the Ideal Power transaction “slipped through the cracks due to an administrative error” and that no fine has been levied against Mast as of yet.

Since 2021, Insider’s “Conflicted Congress” project and other publications have together uncovered 70 lawmakers, now including Scott, who have violated the STOCK Act by disclosing their trades late.

Both Republicans and Democrats alike continue to violate the STOCK Act, which Congress passed in 2012 in an attempt to curb conflicts of interest, insider trading, and bring to light public officials’ financial dealings. Insider found four Democrats in violation of the STOCK Act this week alone.

As Scott and Mast continue to trade stocks, their peers are debating whether federal lawmakers should even be allowed to buy sell, or hold individual stocks at all.

House Minority Leader Kevin McCarthy said that he may seek a stock trading ban if Republicans retake control of Congress in November.

Meanwhile, Republican Sen. Josh Hawley of Missouri has tackled the issue, introducing a bill in January 2022 to ban members of Congress and their spouses from holding or trading individual stocks.

“Year after year, politicians somehow manage to outperform the market, buying and selling millions in stocks of companies they’re supposed to be regulating,” Hawley said in a press release. “Here’s something we can do: ban all members of Congress from trading stocks and force those who do to pay their proceeds back to the American people. It’s time to stop turning a blind eye to Washington profiteering.”

Rep. Chip Roy, a Republican from Texas, has teamed with Democratic Rep. Abigail Spanberger to push a separate but similar bill.

But the GOP does have its own opponents of a potential ban, including Rep. Barry Loudermilk, a Republican from Georgia who said during an April hearing: “If we enact something like this, it will strip the rights and the freedoms of individuals, and everybody on this committee is a free American citizen that has rights.”

Not all Democrats are sold, either, with House Speaker Nancy Pelosi opposing a congressional stock ban in December before responding to bipartisan pressure and unenthusiastically supporting one — all while her husband, Paul Pelosi, continued to trade millions of dollars worth of stock and stock options.

Lewis, Scott’s communications director, told Insider that the senator “has been clear that members of Congress should never profit from their public service. He will review any proposal related to trading that comes before the Senate.”

House Democrats have said they’re preparing to bring a vote on legislation within the next month.