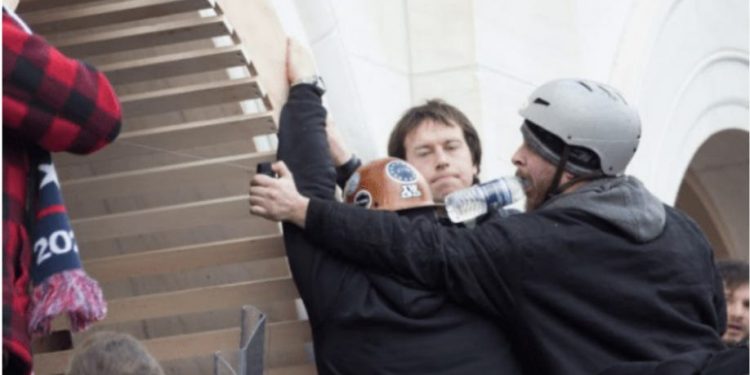 Two New York men wept as a judge handed down prison time for their participation in the Capitol riot last year.

Cody Mattice, 29, and James Mault, 30, both received 44 months of prison time on Friday, according to records from the Justice Department. In April, the two pleaded guilty to assaulting law enforcement officers during the Capitol riot, a Justice Department release says.

After breaching the Capitol, Mattice “reached out to another rioter and grabbed a small object appearing to be a canister,” the release says. “He then sprayed chemical spray at police officers.”

“Mault also got a second canister from the crowd and provided it to another rioter,” the release says.

During the insurrection, Mattice captured himself and Mault on video. In one of the videos, according to the release, Mattice can be heard saying, “It’s about to be nuts,” as he headed toward the Capitol.

Both Mattice and Mault were sentenced before a judge on Friday. The two wept and asked Chief U.S. District Judge Beryl A. Howell for leniency, the Washington Post reported. They continued to weep as Howell upheld their prison time.

“They were not patriots on January 6, and no one who broke the police lines and stopped the democratic process was a patriot that day,” Howell said.

The Capitol riot left five people, including one police officer, dead. Members of the Proud Boys, which is classified as a hate group by the Southern Poverty Law Center, were also present.

Organizers were emboldened by former President Donald Trump’s urges to protest the results of the 2020 election with him, despite Joe Biden’s election victory. While members of Congress were meeting inside the Capitol to certify the results and verify Biden’s electoral win, Trump supporters organized an attempted coup and stormed the Capitol.

After the riot, insurrectionists scrambled to delete photos and social-media posts proving their participation in the Capitol riot. Some broke their cellphones, scrubbed their social media accounts, and tried to wipe hard drives that might contain photos and other proof of their involvement.

But others boasted of their involvement, making it easier for the FBI to identify and later bring charges against them. So far, more than 876 people have been charged in connection with the insurrection, according to Insider’s database.