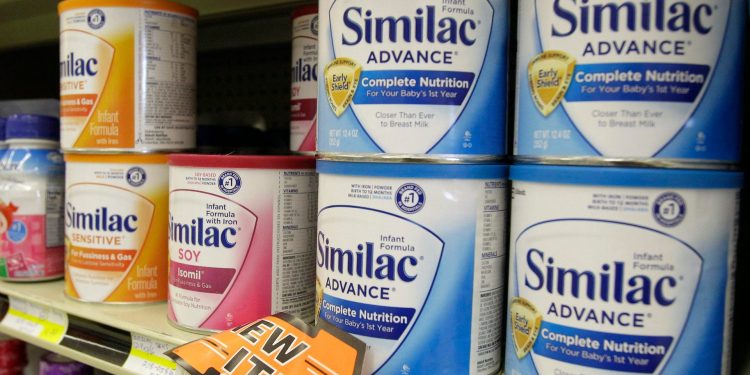 Similac baby formula at a store in Olmsted Falls, Ohio.

The shortage of baby formula that began almost five months ago is expected to drag on into the summer, The Wall Street Journal reported.

The biggest US producer, Abbott Nutrition, is due to resume production on Saturday and start by prioritizing specialty formulas, according to the newspaper.

Abbott issued a recall of its products in February after strains of bacteria potentially deadly to infants were discovered at its factory in Sturgis, Michigan.

The first batch will include formulas for children with severe allergies or medical conditions and will be sent to doctors, hospitals, and consumers later this month, The Journal said.

In May, Abbott said it had reached an agreement with the US Food and Drug Administration allowing it to resume production of Similac formula at its Michigan plant.

The company’s biggest competitors, Nestlé and Mead Johnson, have strived to replace the shortfall caused by Abbott’s production halt, but shortages have persisted in many areas.

Last month the White House took steps to boost imports of baby formula, which had represented only 2% of US consumption. President Joe Biden has said he had not been aware of the formula shortages until April.

At a White House roundtable with infant manufacturers earlier this week, Biden said the next stage of “Operation Fly Formula” would bring 680,000 pounds of powder from the UK and Australia next week. That is enough to make 8.3 million standard bottles, or just under a fifth of average weekly consumption in America.

Last month Insider reported that Kendal Nutricare, a UK manufacturer of baby food used by Kate Middleton to feed Prince Louis, was in talks with the FDA to send formula to the US to help combat shortages.

Abbott and the White House were contacted for comment.